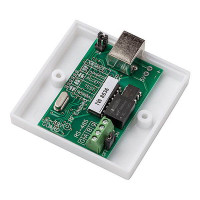 The converter has galvanical isolation of the RS-485 interface and PC and there is no need to have a separate power supply for it. Z-397 Guard USB/RS-485 converter automatically detects the speed and direction of the data exchange and is equipped with transmission direction indicator. After connecting of converter to the PC and installation of drivers, the new virtual COM-port will be added to the operation system. It's allow to connect the ACS software which working using COM-port interfaces (eg Guard Light or Guard Commander).

Purpose
Connection type
RS-485 lines count
RS-485 line galvanic isolation
RS-485 packets integrity control
USB operating mode
Cookies make it easier for us to provide you with our services. With the usage of our services you permit us to use cookies.
Accept Decline
Cookie usage policy