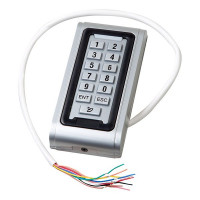 Matrix IV EHT Keys Metal RFID reader is designed for using in the network and standalone access control systems. Matrix IV EHT Metal is intended for access points where needed the control using RFID keys or keyless access by entering the PIN-code or both of them as well as anti-vandal case.

Purpose
Operating frequency
Key types
Reader standard
Reader protocol
RFID reading range (cm)
Keypad
Anti-vandal case
Waterproof and dustproof case
Keys copying protection
Cookies make it easier for us to provide you with our services. With the usage of our services you permit us to use cookies.
Accept Decline
Cookie usage policy